I sit in a cafe where no one is talking. Everyone has their head down. Do they all hate each other? Are they depressed?

No – they’re staring at their phones. 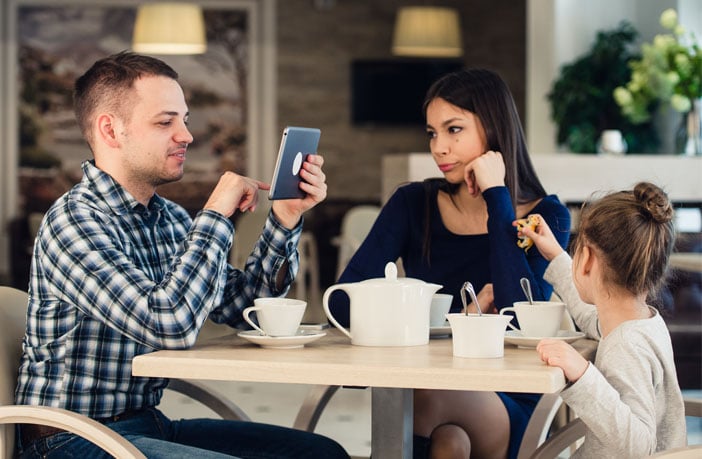 A child pipes up in a train carriage with a reasonable question for his mum about their journey. At first she ignores him and continues to stare blankly at her phone. So does everyone else in the carriage. He asks again, a little louder. So she yanks her earphones out her ears with a vicious glare and screams at him to leave her alone – she’s already told him – will he shut up – and various other hurtful remarks. Then she returns to watching her screen. He has no such entertainment and has to be content with nothing. And learn nothing about interaction but a lot about how it’s okay to ignore one another if you’ve got a phone in your hand. For that’s what most folks are doing.

We recognise additions to drugs and alcohol but we’re soon going to have to acknowledge addictions to technology which some people use compulsively. Not to mention to excuse inappropriate behaviour.

Like alcohol changes behaviour and severe alcoholism can ruin relationships I fear that compulsive checking of notifications and absorption in social media or gaming could be sending us the same way. We may have more facilities than ever with which to communicate but is this diminishing our skills to do so in warm humane ways, face to face? Diminishing interactions which communicate feelings and meanings more accurately than a digital emoji can. It’s certainly in danger of ruining our parenting and trashing the responsibility we have of teaching kids how to be social.

People would once have chit-chatted to strangers at the next table, on the next seat or in the bus queue. Now we’re all heads down creating isolation and distance. We’re learning how to ignore the person next to us in the room – familiar or stranger – by engaging with others miles away, or by gaming, which can overtake the desire to connect with anyone at all.

It’s easier not to. Our phones give us a chance to disengage and close ourselves in a digital bubble, avoiding the slight social difficulty of face to face, eye to eye.

The trouble is, apart from the fact that it is deskilling the youngsters – well and the oldsters too who are supposed to be setting an example – disengagement leads to desensitisation. Desensitisation makes it easier not to care. When you care less you can commit offenses and crimes against others more easily, you can bully more easily, you can disassociate the responsibility we all have to care for one another and maybe be polite to one another which makes a day go round more pleasantly than screaming.

I don’t know what preceded the incident on the train when mum sounded off loud enough for the whole carriage to hear. I acknowledge we’re all driven to less than acceptable behaviour with our kids on occasion, although she kept it up all journey. But I do know that kid did not deserve to be spoken to like that – no one does. Or be ignored for the rest of the hour’s journey without anything to do. He needed his own phone! Better still, he needed someone to talk to.

We all do. However updated we all are, and connected as we need to be to modern communications, it is nothing more than hurtful to be in the company of someone who clearly seems to prefer to communicate with someone else. It hurts us all; child or adult.

And it’s something we perhaps need to give serious thought to as we parent and prepare our kids for the wider world. Phones are absolutely brilliant. But we have to consider and take charge of them and their place in society, not have them in charge of us. Or replace the time given to the warm loving interactions we all inherently need.

I know; you’re going to need your technology to read this! And anyway – I don’t actually mean listen to me – I mean listen.

Really listen. To others. To your own thoughts. To the world around. Most especially to your children.

I think it’s rather ironic that society looks down on babies and toddlers with dummies stuck in their mouths as slightly distasteful or inferior. Yet many of the adults I see use their phones and tablets as little more than something to emotively suck on and bring them similar comfort. Most especially to overcome discomfort, particularly of the social kind!

Few can look another in the eye. So they stare at their technological comforter instead.

I know these gadgets are useful – we couldn’t function without them now. But has our attachment to them crept beyond being useful, to being an addiction?

I suspect it is for many people. And I also suspect it’s impacting on relationships.

Whilst we connect to our technology so obsessively we’re neglecting something far more important: human connection. Humane connection.

We’re neglecting time that we could be engaged with our kids.

It is human engagement that nurtures relationships, builds care and empathy, grows love. I fear some folks are becoming desensitised to what it is to be together socially, lovingly, meaningfully, especially with regard to parenting.

Some of the human connections we encounter make us uncomfortable. So what – we have to learn to deal with that, to get over it. And to stop turning to our dummies when it gets a bit awkward. Be more courageous. And consequently build the skills for strong relationships within our families, with the wider world of people – even those we don’t know that well.

Strong relationships make us happy. With each other. With our world. With the earth.

Strong relationships save the day.

Technology just keeps us busy and keeps us dummified.

It’s worth talking about in your family! It’s worth building healthy habits in the family right from the start!

I was sitting in the hospital waiting room waiting for an x-ray. Nothing serious, except the boredom. I’d read the stuff I’d brought with me, read some dire women’s magazines. Flicked through Yachting World and Caravan Monthly neither of which I do. So sat and people watched.

What used to be a fun thing to do with the kids seemed suddenly incredibly sad. Not because they’re not with me anymore, but because the parents and kids in the waiting room were sitting next to each other like strangers. No communication with each other whatsoever. And that was because of mobile phones.

There was a girl with her arm in a sling – mum was gabbing on the phone to a friend. A boy with his foot in plaster – both his folks were on phones, either gaming or on the Web. The only people talking to one another were two older folks who looked like they’d been together since we thought the earth was flat, yet still had something to say to one another.

Sometimes I worry we’re so busy connecting to someone who isn’t there, or posting drivel on the Web, we forget to connect to our loved ones sitting right beside us.

Sometimes I think phones and the Net are less a means of connecting to a wider group, but more of a means for parents to ignore their kids.

I don’t know whether it’s a spin off from home educating, or whether I’m just old fashioned, but we always engaged with our kids when we were out. In fact the last time my youngest (she was 18 at the time) and I had to sit in the doctor’s waiting room together we had great fun giggling together over ‘position of the week’ in a chat mag. (I’ll leave that to your imagination). It made a dull visit very entertaining I can tell you. In fact when we went back next time we looked for the following issue!

Wherever we went we chatted about stuff; concerns, things we saw, people’s behaviour (good social lessons to be had with that one). Because observing and talking with your child are valuable approaches to furthering their education. Sometimes, of course, we were just companionably quiet. But we were never disengaged with one another because we were busy with others, elsewhere.

Anyway, freed from the waiting room I had then to go sit in a lonely little cubicle with my clothes off and a hideous gown on. Those cubicles reminded me of what I’d just seen in the waiting room; parents in virtual cubicles even though they were sitting next to their children.

As I sat there, a crack in the curtain and a mirror on the wall opposite reflected another cubicle further down the corridor. Inside, a pallid old lady sagged in one corner with her eyes shut looking worryingly like she might never communicate with anyone again. But just as I thought I’d break out my cubicle and go talk to her they called me through for x-ray.

So off I went. But, as I found out later, I had my arse hanging out not having done my gown up at the back.

And it’s just struck me that those people I watched not communicating in the waiting room, would probably be the sort of people to take a snap picture of my backside and post it all over Facebook.

Yet they could not be bothered to make conversation with the child sat next to them.

Is it just me who thinks this is somehow incredible sad?